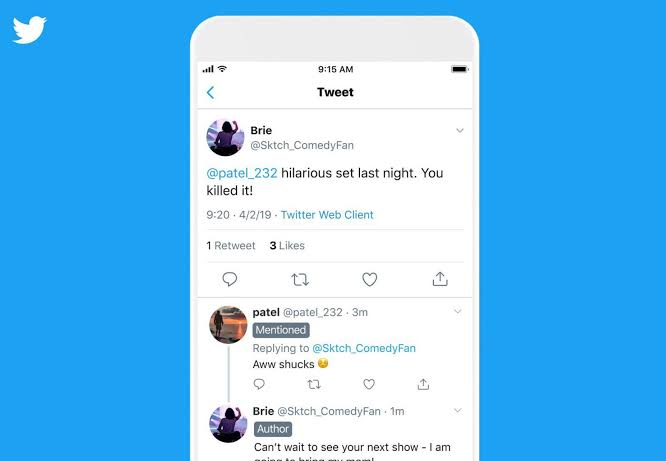 One of the reasons we know why Twitter is so famous among people is one, because of the tweets that we see on the platform, and two, because of the replies that those tweets get in return. It often happens that whenever you have tweeted something, there is at least one person who will reply with information that you might have never heard before. Also, Twitter allows GIFs and other media content in replies so it means that the replies are fun to read too such as Reddit.

However, it was not fun to see the replies on Twitter because they were stacked upon each other until now. But we had seen reports where Twitter was seen testing a new way of showing replies similarly to Reddit. This new method of showing replies inside Twitter is finally live and it has been named as conversation threads. If you use Reddit, you would be aware that it shows which tweet someone replied too. And then, the replies to those replies will be shown accordingly in an intuitive manner.

It looks like the company is happy with the results and has rolled out conversation threads for its users on iOS starting today. Therefore, you will now see that the replies will look different on Twitter if you are on iOS but it will remain the same on Android.

Because, as always, Android users will get the conversation thread feature “soon”. One thing to note here is that Twitter tested the conversation threads way back in 2018 but they looked a lot like Facebook replies. This is also the reason why they were taken back and we can now see that the colours have been removed and we see just lines pointing to replies, again similar to Reddit. If you ask Reddit about this, they will say that “imitation is the sincerest form of flattery”.

WordPress 5.4 update will bring lazy-loading for all images